Ahead of the marathon, expectations were high, as both Mr Jones and Mr Williams are keen runners in their free time. In fact, Mr Jones completed a marathon last year, and Mr Williams is a regular member of the Vizolution Running Club. This means that while the rest of us are catching up on our Netflix backlog and dropping crumbs into our keyboards, Mr Williams is pounding the pavements of Port Talbot.

The national marathon of Wales boasts a fast, scenic route and is arguably one of the UK’s flattest marathons. The 26.2-mile course takes in iconic landmarks, coastal wildlife and even a picturesque medieval village.

Chris finished in an impressive 4hrs and 25 mins, while Rhys clocked in at a slightly quicker 4hrs and 10 mins.

“For me the marathon was a great experience. It was really perfect weather and a really flat course. There were a couple of tough moments, but the amazing support and the thought of the money that we’d raised kept me going to the end,” said Rhys.

Although Chris did finish the marathon, he is adamant he won’t be repeating the experience any time soon.

“I didn’t do as much training as I should have so I found it more difficult to keep up the pace towards the end – the thought of all the donations for LATCH and support that we had really did get me through the last 6 miles! I’ll be sticking to halves and below in future!” said Chris. 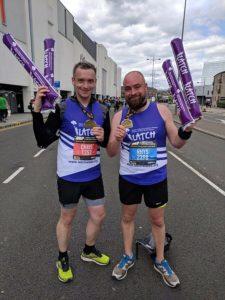 LATCH supports the children and their families who are being treated by the Oncology Unit at the Children’s Hospital of Wales. Around 70 new cases are diagnosed every year in its catchment area from Chepstow to Aberystwyth.

Vizolution Wales has performed various charitable activities for LATCH, including in September 2018, when Leighton Sparkes, Robin Betts and Jonathon Gibb cycled 220 miles from the Vizolution office in Port Talbot to the office in London.